Imagine this… after driving through the spectacular foothills of the Andes and embarking on a boat for your transfer to a quaint fishing community near the shores of Lake Maracaibo. Enjoy an afternoon wildlife tour in a fishing boat looking for river dolphins, birds and howler monkeys that live in the forests and mangroves alongside the lake before retiring to your hammock for the night. Then from the comfort of your hammock just lying there and enjoying the lightning “show” phenomenon over Maracaibo Lake, a show that goes on every night virtually 365 days a year and 366 days on a leap year!

In the morning after breakfast we will visit the impressive rain forest of the western Andes, which is almost as beautiful as the Amazon jungle itself and do a short “jungle trek” – your expert guide will then take you on a butterfly “photo safari before you return to Mérida via the Andean villages of La Azulita and Jají perched high in the Andes – with spectacular vistas all around.

Let Angel-Eco Tours be your guide on this two (or three) day exploration of Catatumbo / Lake Maracaibo and the surrounding areas in western Venezuela – visiting a number of different ecosystems along the way. The wildlife in this region is abundant and colourful as are as the characters that live in the palafitos or stilted houses on the edge of the expansive Lake Maracaibo. Experience the Catatumbo phenomenon which according to Wikipedia – the Catatumbo Lightning (Spanish Relámpago del Catatumbo) is an atmospheric phenomenon which occurs strictly in an area located over the mouth of the Catatumbo River where it empties into Lake Maracaibo.

Few people are lucky enough to experience this natural phenomenon and enjoy the surroundings of the area’s different ecosystems with its plentiful wildlife. For your enjoyment here are some interesting facts for you: The first written mention of the Catatumbo lightning was in the epic poem “La Dragontea” (1597) by Lope de Vega, which recounts the defeat of English raider Sir Francis Drake.  The Prussian naturalist and explorer Alexander von Humboldt once described it as “electrical explosions that are like phosphorescent gleam.” Italian geographer Agustin Codazzi described it as a “lightning that seems to arise from the continued Zulia River and its surroundings.” The phenomenon became so celebrated that it was depicted in the flag and coat of arms of the state of Zulia, which contains Lake Maracaibo, and mentioned in the state’s anthem. This phenomenon has been popularly known for centuries as the Lighthouse of Maracaibo, since it is visible for miles around Lake Maracaibo. Read the Detailed Itinerary.

Day 1 Leaving Mérida early morning with the mist still in the valleys we will visit some old sugar cane factories on the way to Lagunillas and perhaps check out the locals preparing a “chewing” paste that they call “chimo”.

Enroute we will try point out a number of different coffee and cocoa plantations in the Andean foothills in the perfect climate to grow these crops. After lunch, we will arrive at Maracaibo’s basin. Shortly after arrival we will board a local fishing boat and head out into the mangroves, swamps, gallery forests and open lake to observe wildlife such as red howler monkeys, freshwater grey dolphins, iguanas and flocks of birds. We overnight in hammocks that are hung on the decks of stilted houses known as “palafitos” and from the comfort of your hammock you will be able to observe the Catatumbo lightning phenomenon. 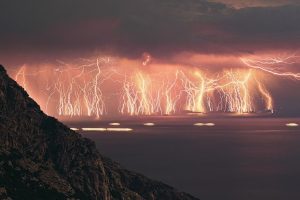 Almost every night of the year this phenomenon exists. (L,D)

Day 2 After breakfast we will visit the rain forest of the western Andes that are almost as impressive as the Amazon jungle itself and enjoy a short “jungle trek” for a few hours. We will also arrange a fun butterfly photo safari guided by our expert guide. After lunch, depending upon where you will head after the tour we can return to Mérida through quaint Andean villages of La Azulita and Jají – the scenery is quite breathtaking with rolling hills, mountains and small waterfalls along the way and the dense cloud forest of the Andean foothills, the home of the rare Andean Bear (Tremarctos Ornatus). (B,L)

Combine this exciting tour with Los Llanos for 6 days full of wildlife and amazing nature or with the Andean mountains and Páramos of Mérida! Get inspired – see trip photos! When to go Guided tours run year-round. Departures usually arranged from Mérida and coordinated with other tours in the area.

Tours run year-round. Of course, our itinerary is completely customizable to suit your adventure goals.

Price – Available upon request. From $325 per person based upon a minimum of four travellers from Puerto Ordaz or Maturin. Gratuities are not included. Check group rates at time of booking. The price includes boat and jungle tours, all meals and lodging.

Lodging – Overnight in hammocks in stilted houses (palafitos). You will be staying in comfortable wooden cabins that have running water, toilets and showers. Some cabins have queen-size beds. Hammocks are available upon request.