Il Parco Nazionale dell'Arcipelago di Los Roques è un Parco Nazionale del Venezuela. È stata fondata nel 1972, under the presidency of Rafael Caldera, encompassing above all, the Los Roques Archipelago, an extensive coral atoll 36 from west to east and 24.6 kms from north to south, made up of some 50 islands and 282 keys (cays).

Where is Los Roques?

Of great diversity and scenic beauty, it is located in the Caribbean Sea, just off the coast of mainland Venezuela, almost in a straight line north of the mainland city of Caracas and La Guaira.

The only island in the archipelago that has a permanent population is that of Gran Roque (1.7 km²) with about 1,200 full time inhabitants.

How to get to Los Roques?

Because there is no regular shipping service, only 15% of visitors arrive by water. For those who do not have access to a yacht or sailboat, the best alternative is to fly like 85% of the tourists who arrive in Los Roques. There are regular flights from Caracas, Maracaibo and Porlamar.

What other important islands and keys (cays) comprise Los Roques? 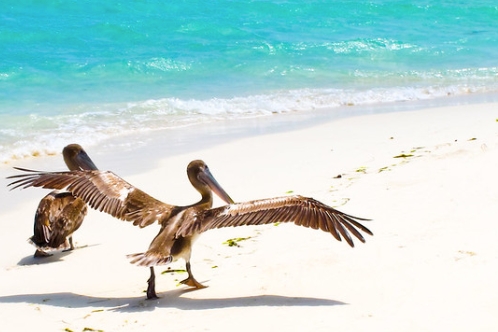 What makes the Archipelago of Los Roques special as a tourist destination?

The park has one of the most diverse and best preserved coral reefs in the Caribbean Sea and many small secluded white sandy beaches (sand flats) on the nearby islands / cays.

There are a wide range of activities although many visitors just want to enjoy the sandy beaches on the nearby islands, snorkel and relax.

Kayaking
Vela
Snorkeling
Fishing – “catch and release”
Scuba diving
Wind and kite surfing
Visit the small museum and the turtle preservation project in Dos Mosquises by boat.
Hiking – the highest point of Gran Roque is barely 130m above sea level but from this point, the lighthouse, one can have great views of the Archipelago.

How are the restaurants and the food?

The restaurants are generally simple but there are some posadas that are quite elaborate – all serve fabulous fresh sea food and cold beer or cocktails. Along the main beach / strip of Gran Roque you will find good breakfasts and “trendy” bars with outside sandy patios. Lobsters are a favourite with visitors, although not served all year round.

How is the snorkelling / immersioni subacquee?

The rich variety of the marine species in the archipelago would impress any scuba diver. Los Roques’ coral reefs are exceptionally varied environments where fluctuations in temperature, piccole aree di mare mosso e di calma, and bright and shady areas where an abundance of nutrients are generated.

If you were to dive in the crystal blue waters on an undersea scuba diving adventure or even with snorkel, you would also see a complex underwater ecosystem of sea grasses. Questo ecosistema è la casa di centinaia di specie di pesci, nonché molluschi, tartarughe, snails, the queen conch and large starfish.

Take your family on one of the islands best boat excursion – snorkelling for starfish.

How does one arrange a scuba diving trip?

Scuba pacchetti immersioni sono disponibili su richiesta. Many travellers add this package on to another Angel-Eco Tours trip. Remember to allow an extra day for travel to acclimatize after a scuba trip.

How is the sport fishing?

One of the most sought-after fish is the Bone Fish, they don’t grow enormous but for the average or even seasoned fisherman or woman it is one of the favourites to catch and high on their bucket list.

One has to buy a permit and it is good to rent a boat (most posadas have their contacts) the captains will then take you to visit different locations.

Are there packages to Fish / Relax?

Sì! For individuals or families.

Los Roques, has been regarded as a fisherman’s paradise for decades. It is word famous for fly-fishing for bonefish, one of the fastest and most beautiful fish in the sea. Many fishermen from all over the world, dream of one day catching a bonefish.

Tuttavia, for most people a bonefish trip is too expensive and can be too ‘hardcore’. Hardcore fishermen will pay a lot of money for the privilege of a few days chasing these silver bullets. And it can be intense, sometime 10 hours fishing, under the hot Caribbean sun. As a family enjoy the perfect balance of a holiday, where those who want to catch bonefish can do so, and those who want to relax can relax.

As Paul Stanley, the President of Angel-Eco, recently wrote – “On a trip some weeks before the pandemic struck, a friend, who is an avid fisherman, my brother, a beach “bum” and myself spent three days / two nights in paradise. We visited three small islands, close to Gran Roque, over the three days and my good friend convinced me to fish with him at each of the locations where we were dropped off each day.

During those few days I fished just using a simple spinning outfit and I caught around 10-11 different species of fish, culminating in one special catch of the day, a nice sized bonefish! I was told that this particular fish is an angler’s dream. Understandably really after the fight that it put up, even better than the two Spanish mackerels, snappers and barracuda that I had caught prior to that. I was literally hooked; I had a blast. After that last catch I stopped fishing, as I felt I had done it all. I then enjoyed the luxurious sunshine and beautiful azure waters – of course washed down with a nice refreshing beer (maybe two!)."

How is the bird-life on the islands? 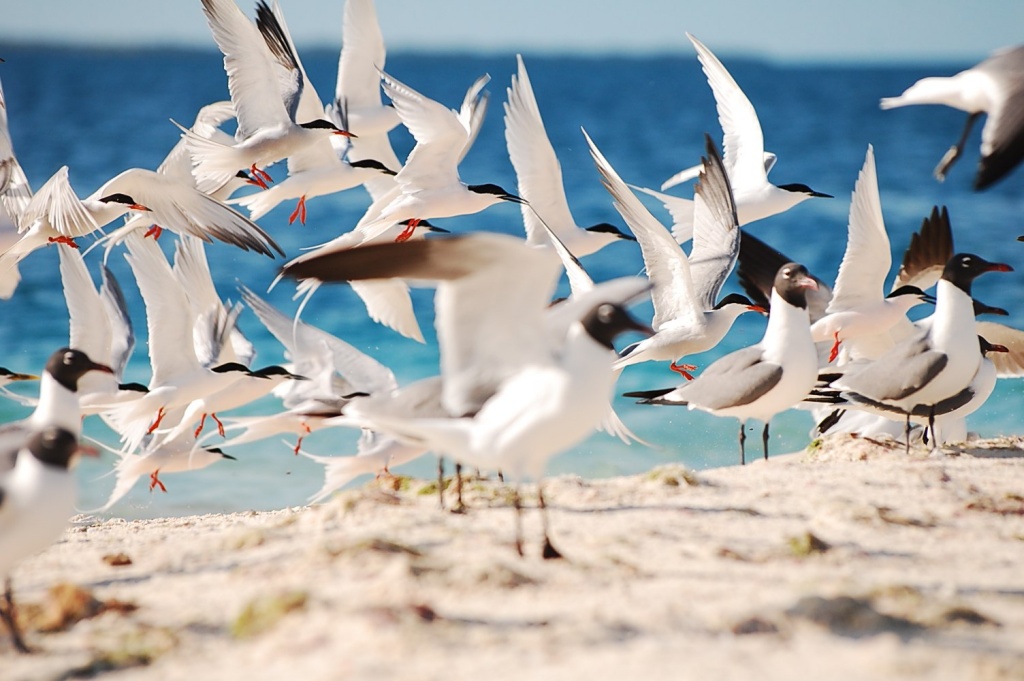 Is there much wildlife on the islands?

Due to the extreme environmental conditions and the lack of fresh water, land animals are not very abundant so the list is limited to a few species of iguanas, lizards, spiders, and insects. The fishing bat (Noctilio leporinus) is the only native land mammal.

It is in the water that the immense wealth becomes evident: 307 species of fish, 200 species of crustaceans, 140 species of molluscs, 61 coral species and 60 species of sponges. There are also 45 species of sea urchins and starfish. Dolphins, sharks, whales, manta rays (Manta birostris) and turtles abound.

The animals that are mostly represented are the green turtle (Chelonia mydas), the botuto or pink queen conch (Strombus gigas), the spiny lobster (Panulirus argus), typical coral reef fish and 92 specie di uccelli. Los Roques is a meeting point for some 50 species of migratory birds from North America . Among the most frequent birds are the brown pelican (Pelecanus occidentalis), two species of booby birds, the red-footed (Sula sula) and the brown booby (Sula leucogaster) and the guanaguanare gull (Larus atricilla). Flamingos can also be seen (Phoenicopterus ruber).

The original rock that serves as its base originated about 40 million years ago, in the Upper Cretaceous Calcareous sediments from snails, corals and other marine debris accumulated on it. With the drastic rise in water level during the last glaciation, the growth of reefs that form two well-defined barriers to the north and south was facilitated. These, in turn, facilitated the formation of islands and keys with their protective effect.

The origin of the archipelago as we know it today is – geologically speaking – very recent, dating back only 10,000 a 15,000 anni. Los Roques has the particularity of being the only coral atoll in the world in whose formation were not formed by volcanic activity.

It is estimated that the human presence in Los Roques dates back to the end of the first millennium of our era. According to recent archaeological studies, the archipelago was a frequent destination for indigenous from Lake Valencia and the central coast of Venezuela and perhaps the Taino Indians from Puerto Rico, who came to perform ritual festivals and to collect botutos, fish, hunt turtles, as well as extract of salt. Also later, during the colonial era, the arrival of people attracted by pearls, salt and mangrove became frequent. Smugglers and pirates used its intricate shorelines as a hiding place.

In the second half of the 19th century, the Venezuelan government signed an agreement with a Dutch businessman for the extraction of guano, an activity carried out mainly by people from Aruba, Bonaire and Curaçao. To them we owe the curious names of many of the islands, ending in the syllable qui derived from the English word “key” which means “cay”.

In the mid-20th century Venezuelan fishermen from Isla de Margarita began to settle permanently, initially on eight of the islands and since the creation of the national park, only on Gran Roque.

You are taking a fantastic voyage into one of the world’s most spectacular locations for scuba diving and snorkelling. Si verifica una delle poche destinazioni eco-immersione nel mondo di oggi.

Then choose your own private beach to fish or simply lap up the sun’s rays – even snack on a delicious lobster and other local fresh seafood.