Karen Angelo is the niece of Jimmie Angelo and President of the Jimmie Angelo progetto storico (JAHP). Gli JAHP’s mission is to provide accurate information about Jimmie Angelo. She published a photo biography titled “Angel’s Flight – The Life of Jimmie Angel – American Aviator-Explorer – Discoverer of Angel Falls” in 2019.

Angel Falls in Venezuela’svast Parco nazionale di Canaima may have been known to the indigenous Pemón people of the southeastern Gran Sabana region. But due to its location on the House of the Devil, perhaps even the Pemón did not know of the waterfall’s existence because they avoided the mysterious Devil’s Canyon within the table mountain’s interior where Angel Falls, the world’s tallest waterfall, cascate 3,212 piedi (979 metri).

Born in Missouri near St. Louis in 1899, Angelo was obsessed with Auyantepui; un 435 square mile heart shaped tabletop mountain in the southeastern Gran Sabana region of Venezuela. Auyán means devil and tepui means house in the Pemón language, hence the Devil’s House. Angelo believed that it was the home of a lost river of gold that he claimed to have been taken to years before by a mining geologist he called McCracken.

Angelo was working as an aviator-guide in the Gran Sabana per il Santa Ana Mining Company of Tulsa, Oklahoma nell'autunno del 1933 with his Mexican co-pilot and mechanic Jose Cardona and mining official D. H. Curry. While on a solo flight Novembre 16, 1933, Angelo flew a Travel Air S-6000B, powered by a three hundred-horsepower Wright J-6-9 engine, registration number NC-431W into Diavolo Canyon and saw for the first time what was to become known to the world as Angel Falls. A causa di incessanti piogge, Curry e Cardona quit the area without seeing what Angelo referred to as his “mile high waterfall.”

The name Angel Falls first came about during a Caracas reunion in 1937 with Angelo and his friends, American petroleum geologist I. F. “Shorty” Martin e Venezuelan civil engineer and expert outdoorsman and mountaineer Gustavo (Cabuya: “String”) Heny. They were talking about the waterfall and when they did not have a name for it, Heny suggested the name Angel Falls; using Jimmie’s last name because he had made it known to the world.

Jimmie Angelo e Angel Falls became better known to the world as the result of his Ottobre 9, 1937, landing of his Flamingo airplane El Rio Caroní, onAuyantepui in search of McCracken’s lost river of gold.

Angelo had scouted a landing spot on Auyantepui from the air.

Heny e Cardona, who was born in Barcelona, Spagna, had explored for a foot route from their camp at Guayaraca on Auyántepui’s south flank, per il sito di atterraggio proposta che era sul lato settentrionale del pianoro. La loro ricerca era riuscita solo in parte. A disgruntled Cardona returned to camp after a few days while Heny continued to pursue a northern route. He was able to establish a route across much of the plateau but was turned back from reaching the planned landing site because of the tepui’s great interior wall. Durante i suoi quindici giorni di ricognizione, Angelo dropped supplies attached to small parachutes that had been fashioned by Heny’s sister Carmen. 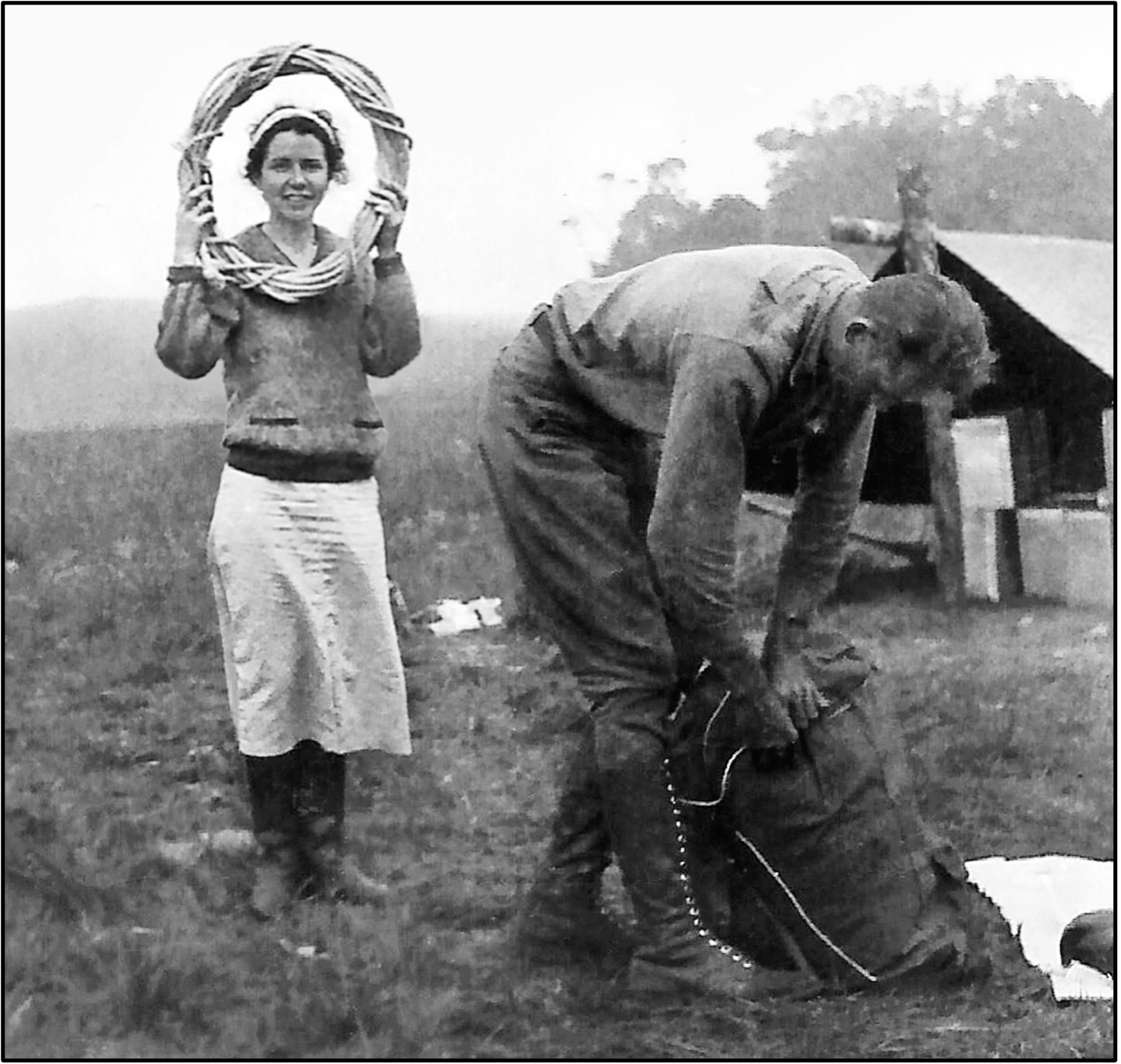 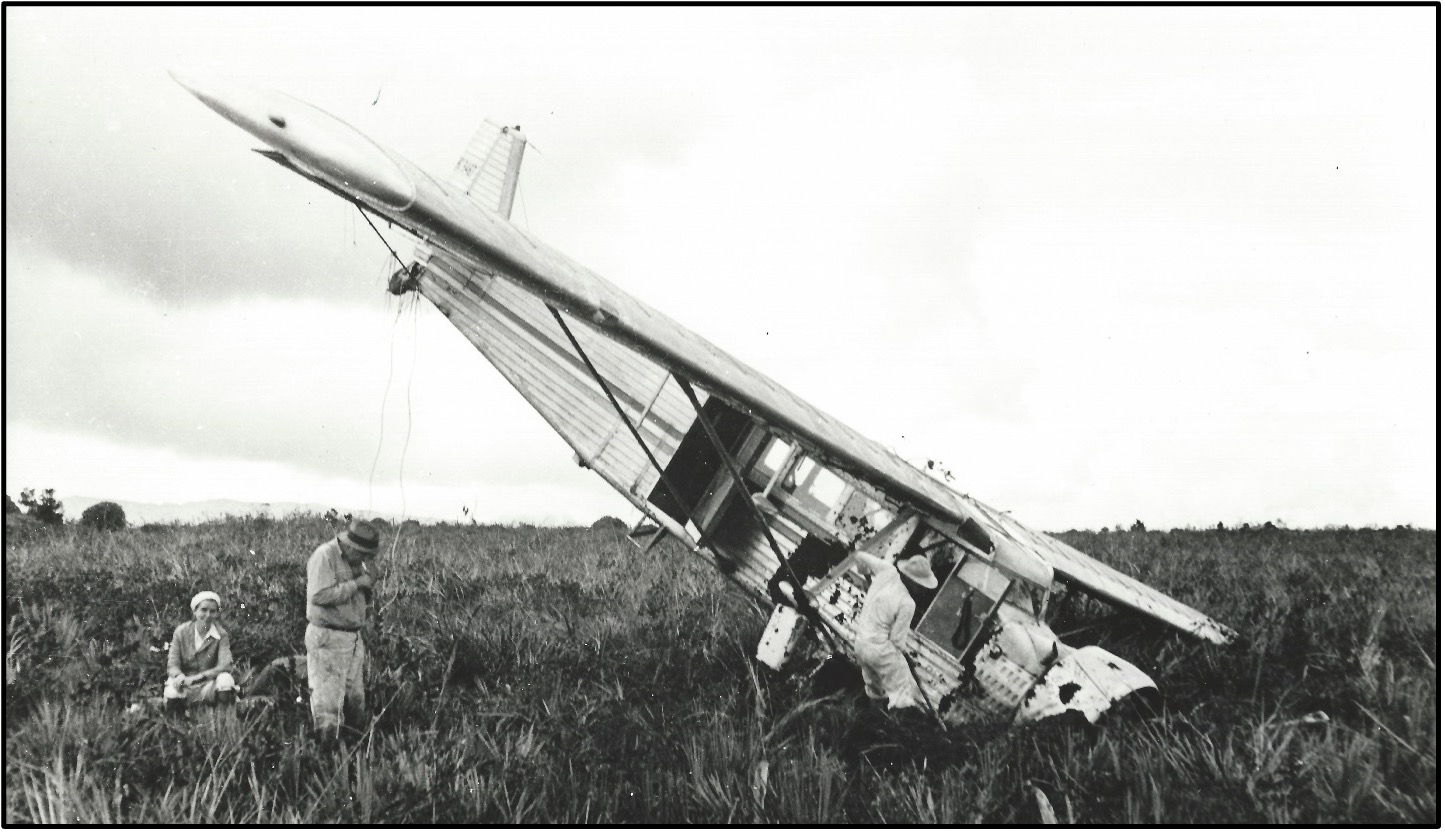 El Rio Caroní came to rest with its nose and landing fear buried in mud. Marie sits with Jimmie standing nearby as Sottile attempts to free the airplane from mud.

Angelo had expected pilots to come to their assistance, but the search was delayed due to their loss of radio contact with Cardona. Cardona was able to send a message to Heny’s friend William H. Phelps Sr. in Caracas. Phelps sent an airplane to look for them, but the pilot could not see through the dense clouds covering the mountain.

On October 11th, when it became clear that there was no gold to be found and that El Rio Caroní was hopelessly mired in her muddy landing spot the landing party started the long march from the mountain to the village of Karamata in the valley below.

As planned, should the aerial part of the expedition for gold encounter trouble, the capable Heny e Sottile led the Angels down from Auyantepui to their camp at Guayaraca and on to Karamata in an arduous march for survival that took eleven days. According to Heny’s sister Carmen, "Jimmie was a great pilot, ma lui non era molto buono per terra. He didn’t like to walk.” 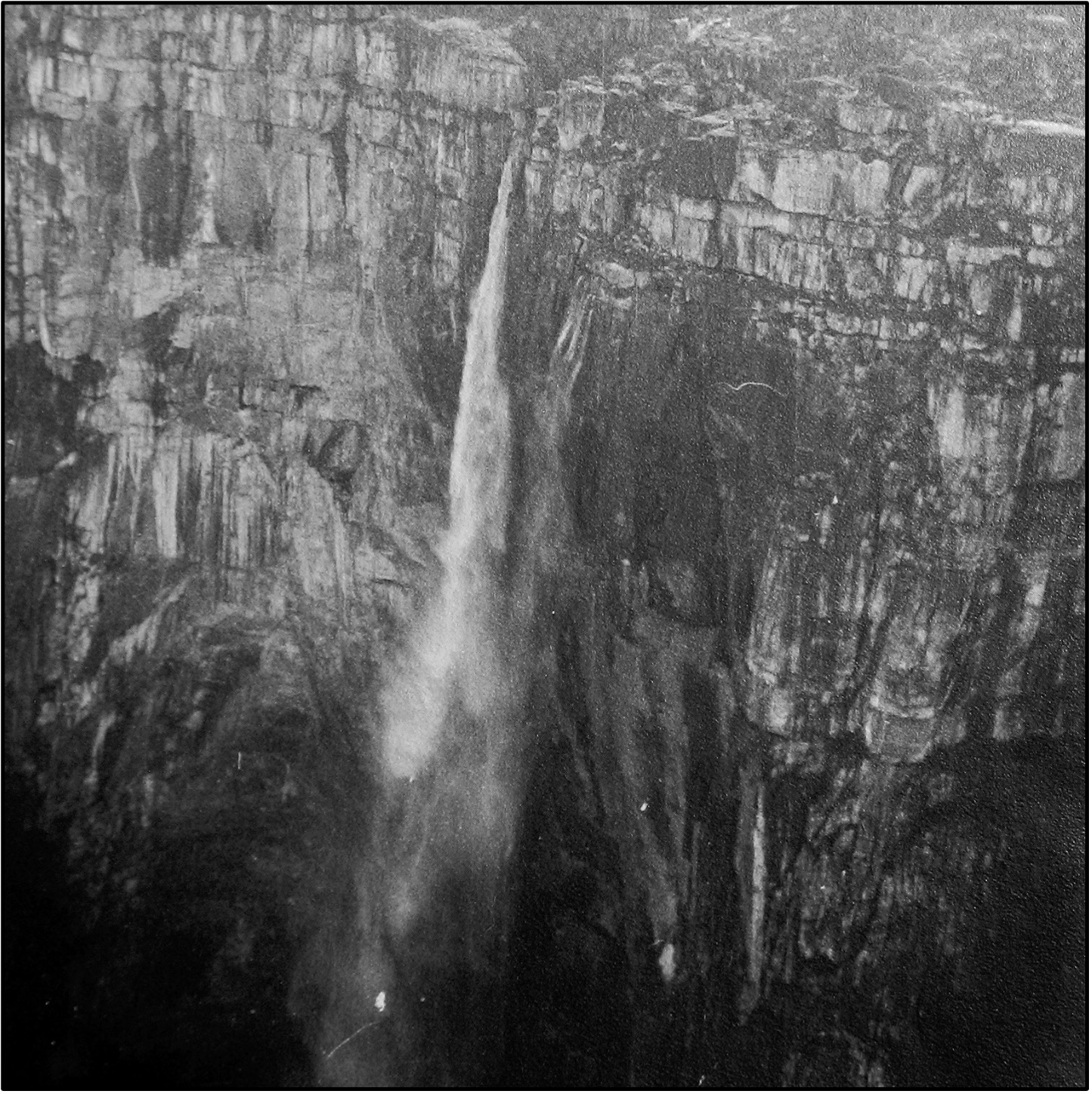 Gli Venezuelan government officially designated the waterfall Salto Angel in a Dicembre 1939 document entitled “Exploración del la Gran Sabana," Journal of Development, Non. 19. The work contained the Gran Sabana Expedition’s findings with photographs and maps of their explorations and surveys. The first official photographs of the waterfall in its entirety were taken from Angel’s airplane Maggio 1, 1939 by mining engineer Carlos A. Freeman, who was one of the co-leaders of the expedition.

Ten years later, American photojournalist Ruth Robertson led the first successful expedition to the base of Angel Falls who measured it and made it officially the world’s tallest waterfall. Il suo articolo, “Jungle Journey to the World’s Highest Waterfall," published in the Novembre 1949 edition of National Geographic is a splendid account of an extraordinary journey. 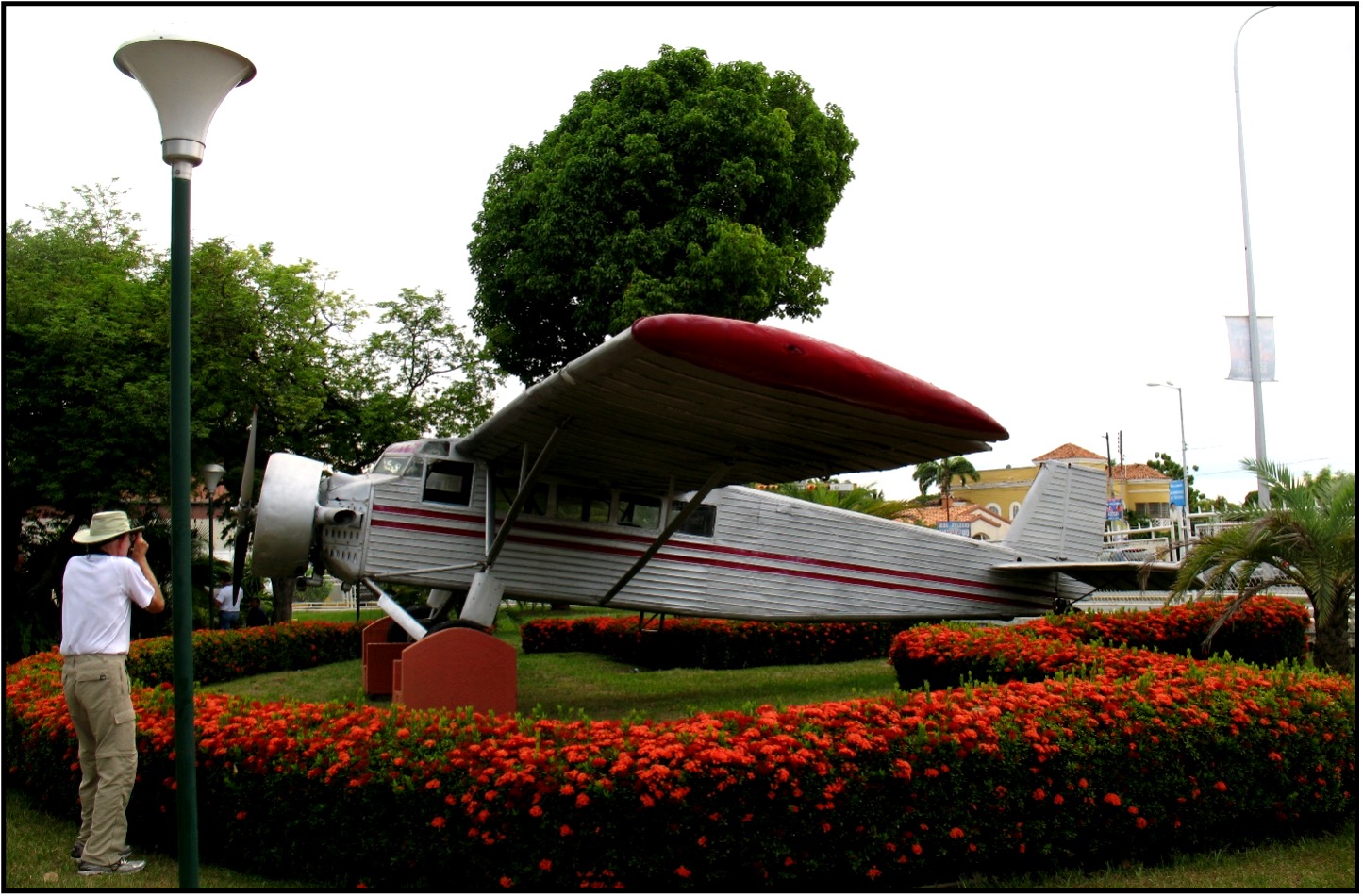 Aeroplano di Jimmie Angelo El Rio Caroní remained on Auyantepui per 33 anni. Il suo futuro è stato cambiato in 1964 when the government of Venezuela declared it a national monument. In 1970, it was removed in sections by Venezuelan Air Force helicopters and taken to the Aviation Museum in Maracay for restoration. It was later moved to the airport at Ciudad Bolívar where it remains displayed on the green in front of the passenger terminal.

The federal government represented by the Venezuelan Air Force would like to return El Rio Caroní to the Museum of Aviation in Maracay so that it can be properly conserved under controlled museum conditions. Although the airplane has suffered severe damage several times from automobiles and a falling tree, il Stato di Bolívar refuses to return the airplane to Maracay.

All photos displayed with the permission of Karen Angelo, © JAHP Archive Copyright © 2002. Tutti i diritti riservati.

Except by Karen Angelo, no part of this article may be revised, reproduced, or transmitted in any form by any means electronic, meccanica, fotocopie, registrazione o altro, o conservati in un sistema di recupero, senza il preventivo consenso scritto.