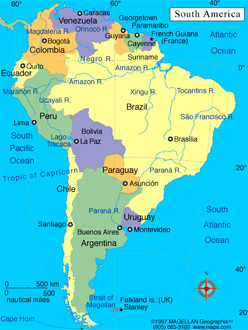 The country of Venezuela is situated at the far northeastern corner of the continent of South America. Venezuela is located entirely in the tropics. It is bordered by Brazil to the south, Colombia to the west and Guyana to the southeast. It has both an Atlantic and a Caribbean coastline stretching over 1,600 miles. There are direct U.S. flights to Venezuela’s capital city Caracas from Atlanta, Houston, Miami, New Jersey, New York and Puerto Rico. In particular, the flight from Miami takes less than three hours, making Venezuela conveniently accessible.

Venezuela has a vast array of ecosystems-over 25 different ones. Few countries in the Caribbean region (much less the world) contain such a variety of climates and landscapes.

In most parts of the country, the temperature stays around 77° F (25° C) during the year. However, the mountainous regions are cooler, and there is even snow at the higher elevations of the Andes Mountains.

What makes Venezuela so attractive as an adventure travel and ecotourism destination is the diverse locations that offer unique travel experiences-from Caribbean islands to rainforests to grasslands to mountains. Examples of Venezuela’s diversity include the following:

Henri Pittier National Park (founded 1935) & La Cienaga
Venezuela has a multitude of national parks (43 to be exact) that showcase the diverse ecosystems of the country. Venezuela’s national park system was established in the early 20th century. In 1935, the mountainous land along the northern coast was used to found Venezuela’s first national park. Originally Rancho Grande, the park has been known as the Parque Nacional Henri Pittier (named in honor of a Swiss biologist and ecosystem champion) since 1953. The park covers 107,800 hectares (416 sq mi) and extends south from the Caribbean coast into the mountains almost as far as Maracay, the capital of Aragua State.

The Swiss biologist, Henri Pittier, was the first to protect the Venezuela’s ecosystems. Parque Nacional Henri Pittier has dramatic topography that is characterized by steep slopes covered with deciduous and tropical forest and cloud forest at higher elevations. The park’s flora is exuberant. Arboreal ferns, bromeliads, and several species of ornamental plant-notably the rare, endemic Gunnera pittierana all flourish. Animal life is equally diverse and the park is home to jaguars, pumas, ocelots, otters, brocket deer, tapirs, kinkajous, coatis, tree porcupines, several species of snake and lizard and the marsupial frog. It is also home to approximately 43% of the bird species of Venezuela totaling around 580 different species.

The less-developed Caribbean side includes crescent bays and beautiful beaches at Cata, Cepe, Cuyagua and Choroní. Along this coastline are many excellent spots for snorkeling, diving, relaxing on deserted beaches or simply enjoying hikes into the surrounding rainforest.

Then there is the hidden gem – the tranquil lagoon of la Cienaga – just 15 mins or so by boat from the quaint fishing community of La Boca. The lagoon and its bordering mangroves teem with underwater life – snapper, parrot fish, angel fish, trumpet fish, moray eels, lobsters, sea turtles and octopus amongst many other “colourful” species – not to mention the many types of flourishing corals and sponges. The lagoon itself is surrounded on three sides by xerophytic forest and its entrance opens directly into the Caribbean Sea. There are more hidden gems too on the other side of the mangroves, small lakes where scarlet ibis flock at certain times of the year and trails where one can often see capuchin monkeys in the nearby forest and animal tracks from the illusive inhabitants.

Venezuela’s Caribbean Islands
Many visitors to Venezuela come to experience the sun, beaches and wildlife of beautiful Margarita Island. This is a popular and glorious destination, but the island gives just a hint of the natural wonders located in other less-traveled regions of Venezuela. For instance, an equally stunning but less crowded alternative to Margarita Island is the Los Roques archipelago, which is an unspoiled Caribbean jewel for relaxation, bird watching and scuba diving.

Venezuela offers much more in terms of natural and wildlife diversity than many other so-called “popular” Caribbean or Central American destinations such as Cuba, Mexico and Costa Rica. And in Venezuela, you do not have to fight the crowds.

Venezuela’s Amazonas
The Amazonas’ western region features tropical rainforests and is home to a variety of flora including lianas, strangler figs, bromeliads, tree ferns, orchids, lichens and mosses. The dense jungle landscape is home to many rare and endemic plant species. Eastern Amazonas is dominated by the forested mountains of the Sierranía La Neblina. The luxuriant forests are home to an exotic array of fauna, including mammals such as manatee, red howler and woolly monkeys, jaguar, puma, ocelot, tapir, brocket deer, agouti and armadillo. The forests are also teeming with bird life such as macaws, parrots, toucans, parakeets, tinamou, contingas and hummingbirds.

Two excellent destinations in the Amazonas include Puerto Ayacucho with it’s indigenous museum and market place for hand made souvenirs and the array of indigenous peoples that now live here. It is also the stepping off point for a fabulous river trip in a “bongo” a boat with covered roof. The bongo is equipped with hammocks even, to relax in, for the 5 hour or so journey to Autana, a table top mountain deep in the rain forest of the Amazonas. Autana – is called the “Tree of Life” by the local indigenous myth and legends folklore.

Guyana Highlands
The Guayana Highlands is a rocky upland region encompassing the central part of Guayana south of the Orinoco Delta. It is bordered by Guyana to the east and Brazil to the south. The region is rich in bird and animal life, features the legendary Angel Falls and approximately 160 magnificent table top mountains.

Canaima National Park makes up a good part of this region, home to the Pemón Indigenous people. The park is a UNESCO World Heritage Site it is the sixth largest national park in the world and features Angel Falls the tallest waterfall in the world (discovered by Jimmie Angel). Kamarata Valley – the Valley of the Lost World – within the park, is a unique destination combining different ecosystems, savanna, rainforest, jungles, canyons and spectacular waterfalls. The Pemón lodges of Uruyén and Kavak as well as Kamadak Camp are spectacular venues all overlooked by towering tabletop mountains. The majestical Auyántepui – known as Devils Mountain to the local Pemón, being one of them.

Orinoco Delta
The Orinoco delta is a vast system of waterways weaving through a simmering jungle to carry the waters of the Orinoco to the Atlantic Ocean. The delta is divided into upper and lower regions, west and east of the Caño Macareo respectively. In 1991, the lower delta was protected through the establishment of the Mariusa National Park.

The delta is rich in plant and wildlife. Jaguar, puma, ocelot, red howler and capuchin monkeys, capybara, agouti, giant otter, manatee and dolphins are just a handful of the countless species of mammal that can be observed in their natural habitats. Among the extensive bird population are hoatzin, macaws, parrots, toucans, caciques, kingfishers, cormorants, egrets, falcons, hawks, harpy-eagles, weaverbirds and hummingbirds. There is also an untold number of amphibians, reptiles and fish species, including anaconda, boas, vipers, fer-de-lance, coral snakes, iguana, cayman, turtles, piranha, stingrays and catfish.

Slide show of the Orinoco Delta

Oriente
Located in the north east between the Caribbean Sea to the north and Orinoco to the south, the Golf of Paria and the Territorio Federal Delta Amacuro to the east and the states of Guárico and Miranda to the west.

Founded in 1881 with the name of Estado Oriente and with Cumaná as it’s capital. Now the region of the Oriente combines the states of Anzoátegui, Monagas, Sucre and Estado de Nueva Esparta (Margarita / Coche Islands).

This region was once a thriving tourism destination as it has beautiful beaches (such as Playa Medina), coastal islands of Mochima National Park, Margarita / Coche Islands, La Cueva del Guácharo (Guácharo Cave) and even hot springs in Paria. Now it still has a decent tourism infrastructure but the hoards of people no longer come.

Coffee, sugar, cacao and tobacco are all grown in this region and one can even find “cock-fighting” rings in some small towns – but not very “eco”!

The Andes
The Andes are one of the world’s great mountain ranges and the backbone of South America. The Venezuelan Andes stretch for hundreds of miles, beginning in Barquisimeto and running through the states of Trujillo, Mérida and Táchira before reaching the Colombian border. Besides being a heaven for botanists and wildlife enthusiasts, the Andes is by far the best place in the country to practice adventure sports. A host of activities are available, such as hiking, trekking, mountaineering, climbing, paragliding, fishing, horseback riding, camping and mountain biking. A visit to Los Nevados and the Teleférico of Mérida are definite musts – although as of writing in October 2015 the Teleférico of Mérida has not yet reopened.

The phenomenon of the Catatumbo Lightning is within a stones throw at the foot of the Andes and on the edge of Maracaibo Lake.

Los Llanos
The Llanos (plains) are the vast savannas stretching west from the Orinoco Delta to the Andes mountains and south into Columbia. They consist of both high and low plains, and are primarily grasslands dotted with woodlands and streaked with rivers, all of which empty into the Orinoco basin. Within this vast area are three national parks: Río Viejo, in the western Llanos near the Andes, Aguaro-Guariquito, in Guárico State and Cinaruco-Capanaparo in the eastern region of Apure State.

Itinerary to Mérida and Los Llanos

Caracas
Caracas is home to over five million inhabitants (a quarter of the country’s total population). Caracas is by far the most modern, metropolitan city on the continent and is the focal point of Venezuela’s trade and industry. The metropolitan district offers a wealth of shopping centers, hotels, restaurants, cafes, bars nightclubs, commercial plazas, cinemas, theaters and museums.
© Copyright 2022 Angel-Eco Tours