Tribute to Jimmie Angel. The overland route by Ruth Robertson to Angel Falls 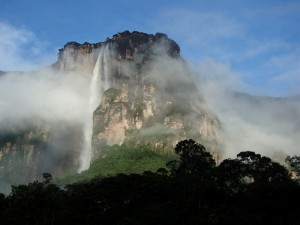 Cascading from a cliff more than half a mile high in the exotically beautiful Venezuelan jungle south of the Orinoco River is Angel Falls ● Churún Vená ● Salto Angel, Earth’s tallest waterfall, 15 times higher than Niagara Falls. Its first drop is 2,648 feet; its total 3,212 feet. The world’s tallest waterfall is named after American aviator-explorer James “Jimmie” Crawford Angel (1899-1956). Angel first saw the waterfall 18 November 1933 while flying solo in the Churún Canyon (also known as Devil’s Canyon) in the heart of the vast tabletop mesa known as Auyántepui (Devil’s Mountain). He remarked in his pilot’s log book, “FOUND MYSELF A WATERFALL.”

Carlos A. Freeman photographed Angel Falls from Jimmie Angel’s Hamilton airplane 1 May 1939. It and a companion photo of Angel Falls were the first published photographs of the waterfall appearing in “Exploración de la Gran Sabana,” Revista de Fomento, No. 19, December 1939. Freeman was a Venezuelan mining engineer and one of four leaders of the Venezuelan Ministry of Development’s 1939 Gran Sabana Expedition. Jimmie Angel was the pilot-guide for the expedition which worked in the field for five months. The first base camp for the expedition was near the Pemón village of Kamarata which is located in Canaima National Park.

The waterfall was officially named Salto Angel (Angel Falls) in December 1939 by the Venezuelan government in honor of Jimmie Angel’s exploration of the Gran Sabana during the years 1933-1939. His ashes were scattered over the waterfall 2 July 1960.

In 1947, American photojournalist Ruth Robertson saw Angel Falls while flying in an unconverted C-47 in Churún Canyon (Devil’s Canyon). During that first flight, Robertson shot more than a dozen Kodachromes and resolved to enter the canyon on foot to photograph Angel Falls from below and to determine its exact height. In May 1949 she led the first expedition inside the Churún Canyon. Her photographs as well as her account of the journey were published in National Geographic, November 1949, and the falls’ height announced to the world: the drop of 2,648 feet; the total 3,212 (939 meters)

“How beautiful the scene from the camp that afternoon, with the Churún River in the center, framed on both sides with trees in the background, the magnificent waterfall… Here the falls were solid, immovable, real…”
-Ruth Robertson

For many years Ruth Robertson’s Expedition was mostly overlooked in official chronicles of the history of Angel Falls, but contemporary writers Karen Angel, documentary filmmaker Isabel Barton and entomologist Jorge González. Ph.D. are helping through their writings and filmmaking to make the public aware of her contributions to exploration.

Mr. Stanley will share his experiences as President of Angel Conservation, an organization he founded to work with and preserve the culture of the indigenous Kamarata Valley Pemón and the flora and fauna that gives them life.

About Our Trip to Angel Falls: This trip is, in part, a fund raising benefit for the Jimmie Angel Historical Project (JAHP), a 501(c)(3) organization incorporated in California, EIN: 68-0372407.

Ruth Robertson’s epic expedition started in Caracas on 23 April 1949; she reached Angel Falls on May 11th and Mayupa Rapids on May 17th. Our expedition will take only eight days!